Guangxi Yuchai Machinery Company Limited ("GYMCL") is one of the largest engine manufacturers in China. GYMCL engages in the manufacture, assembly, and sale of a wide variety of light-, medium- and heavy-duty engines for trucks, buses, passenger vehicles, construction equipment, marine and agriculture applications in China. GYMCL also produces diesel power generators. The engines produced by GYMCL range from diesel to natural gas and hybrid engines. GYMCL has a strong reputation among vehicle manufacturers and customers for the performance and reliability of its products as well as its after-sales customer service.

GYMCL’s products range from 1.2L to 105.6L over 10 engine platforms with a power range from 60PS to 3,600PS. In its current portfolio, the number of engine series offerings is 30 and GYMCL is intending to further expand its reach in the on-road diesel and natural gas engine markets as well as in the off-road market with improved product offerings such as higher rating agricultural engine, high horsepower marine diesel engine and power generator engine. GYMCL produces diesel and natural gas engines compliant with China National V emission standards, and also has the ability to produce certain diesel and natural gas engines compliant with China National VI emission standards as well as develop alternative fuels and environmentally friendly plug-in hybrid diesel and gas engines with improved fuel efficiency. GYMCL also has the ability to produce diesel engines compliant with China Tier 4 emission standards for use in off-road machinery. 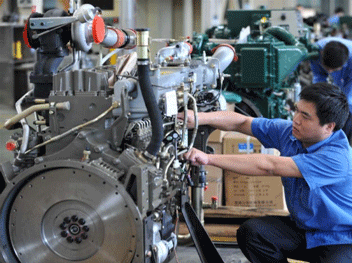 GYMCL distributes most of its engines directly to auto plants and agents from its primary manufacturing facilities in Yulin City. In addition, GYMCL operates a number of regional offices in major geographic regions in China. With a sales force of approximately 777 persons nationwide in China, GYMCL provides a comprehensive range of services to its customers, including dispatching engineers to provide on-site assistance to major customers in the resolution of technical problems.

As a result of its research and development efforts, GYMCL has a large patent portfolio with over two thousand patents registered in China as of December 31, 2018. The types of patents that it has registered are invention patents, utility model patents and design patents. The term of patent protection is ten or 20 years from the filing date depending on the type of patent registered.

All raw materials, external supplied parts and components are checked for conformity with the required quality and specifications. Each stage of the production process is monitored by a quality control procedure and the final product undergoes standard conformity and specification testing using an automated testing laboratory. To promote the safety of its workers, GYMCL has established a safety department to supervise the proper use of equipment prevents fire and explosions and promote safe practices and procedures in the workplace.